A Time to Mourn 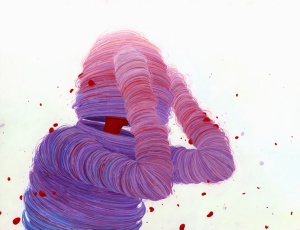 On a Sabbath Jesus was teaching in one of the synagogues, and a woman was there who had been crippled by a spirit for eighteen years. She was bent over and could not straighten up at all. When Jesus saw her, he called her forward and said to her, “Woman, you are set free from your infirmity.” Then he put his hands on her, and immediately she straightened up and praised God.

I don’t have the inside scoop on what constitutes spiritual crippling today. Many of us tend to scratch our heads at the role of bad spirits in the New Testament, and focus more on the scope and power of Jesus’ healings. But this decades-long affliction makes me wonder.

The woman in this account is “a daughter of Abraham, whom Satan {had} kept bound” for long years; her affliction had left her debilitated, unable to straighten at all”. Is it much of a stretch to imagine Satan working in similar ways today, crippling God’s children in body OR spirit? Isn’t a spirit of despair, for example, as disabling as a physical infirmity? Could Satan use such a spirit to disable God’s children today?  I wonder, because a heavy spirit of sorrow and unresolved grief crippled my spirit and ate at my faith for many years, long after I became a child of God.

As a new convert, I delighted in Jesus’ promise to comfort those who mourn – for me, this promise was as great as that of forgiveness. Still, long after my baptism, there were oceans of pain within me that belied full healing. As years passed, I began to believe that full comfort and renewal would come only in the next life, when Jesus would wipe every tear from my eyes and let me see the divine purpose behind my losses. Once, when I dared to share my deep-seated grief with a strong Christian leader, I was told to forget the past – part and parcel of the sinful life I’d been forgiven – and to fix my eyes on the way forward. Lacking an alternative, I buried my grief and soldiered on. The problem is that repressed grief does not dissipate like ashes or dust. Instead, it absorbs subsequent losses like cancer and waits like a dormant volcano to explode. My blow-up came in 1999, after twenty-one years of repressing the greatest loss of my life and trying to move forward without knowing how to grieve.

No one had told me this could happen.

When my grief erupted, it was as if the death had just taken place, and mentally and emotionally, I was back in 1978 – pre-Christian days for me. I went for extensive grief counselling, but my counsellor had not successfully put his own life-shattering grief to rest, and thus was incapable of guiding me to the other shore. He empathized, but gave very little direction. The more I talked and wrote and cried, the more pain rose to the surface. I’m not sure if we were making any real progress. But midway through, my counsellor went to rehab and I never saw him again. I tried to reoccupy my present life and convince myself and others that I was better.  But the haunting dreams, the bottomless sorrow, the self-accusatory thoughts and the inner devastation never left, no matter how hard I tried to pray, work, journal, and wish it all away. I was sick with it, and sick of it, but instead of dissipating, the mass of grief kept growing. It was being fed by other losses: twists and turns my life had taken since.

I knew from reading dozens of grief books that I was suffering some version of “complicated grief”, and figured I must have broken a world record in “delayed grieving”. But finding labels for my ailment wasn’t the same as finding a cure. All the books recommended grief counselling – and that had been a flop. I even went to a grief recovery group, but the newly-bereaved members were so horrified by the length of my grieving that I never returned. I was dimly aware that I’d accumulated an Everest of grief in the years since my major loss — all the moving, loving, leaving and longing had left its mark on me – but had no idea how to take its measure or break its hold on me. I felt like a freak and the most hopeless of lost causes.

Fear, anxiety, guilt, pain, sorrow, longing, disorganization, depression, despair, confusion, lack of concentration, loss of faith, irritability, tension, frustration, restlessness, grief spasms, isolation and withdrawal: these are some of the emotional and spiritual effects of unresolved grief. Physical manifestations include loss of pleasure, gastro-intestinal disturbances, decreased energy and motivation, lethargy, tearfulness, heart palpitations, trembling, shaking, hot flashes and dizziness. This is what the grief experts say. They also say that the impact of grief increases with the number, type, and quality of what are called ‘secondary losses’, and is compounded by the lack of a  social support system. I believe a social support system must consist of others who recognize and understand the impact of grief, and don’t turn away from those who mourn long and deeply.

I think our culture downplays the depth and breadth of grief and loss, and fails to teach us why and how to grieve. After the death of a loved one, followed by the most cursory of rites (a sanitized, 45-minute funeral), survivors are expected to sail solo through the ‘five stages of grief’, or to simply ‘get back to normal’ after the first year has passed – or even sooner. For some losses and some survivors, this might be enough. For example, I continue to miss each of my grandparents and wish they were still part of this world, but their deaths were not untimely or shocking (except for my maternal grandfather, who died when my mother was ten.) They had lived full lives, and there wasn’t ‘unfinished business’ between me and them. These losses don’t haunt me. But other losses, especially those we experience early in life, leave much deeper scars. And some of our greatest losses may not involve a physical death at all, but rather an abandonment or a betrayal that cuts like a cleaver. These profound losses must be reckoned with and mourned completely, or their effects may never go away.

I’ve observed that most people aren’t eager to talk about death and grief, though as we age, this seems to change for some.  Still, starting to read the daily obits is not the same as discussing grief’s ravages.  We who’ve experienced early and/or profound loss are more attuned to grief in others, and for everyone’s sake, we need to speak up more. Many people are frozen in accumulated grief and don’t even realize it. Talking about grief and loss shouldn’t be taboo, weird, or morose, and by denying the presence and impact of grief, we stigmatize those who are bent and unable to straighten under its weight.

Perhaps I needed to become a ‘grief expert’ in my own life before I could truly help others. Who knows why the bondage lasted so long? But God eventually sent an angel – in the form of Tammy Fleming, a friend I hadn’t seen in over twenty years — to point me to the right tools and break the death-hold of grief in my life.

In my next article, I’ll share that story and what I learned with you.