This is not a picture of me. This is a picture from a Lucozade ad of how I wish I looked.

Several months ago, I was strolling through my favourite thrift store when I spotted a brand-new pair of roller skates for the unbelievably low price of $10. (Believe me, this is cheap-cheap-cheap where I live!)  Not only were they the four-wheeled, shoes-bolted-to-rollers type that I’d secretly been wanting to try, they were exactly my size. Of course, I put them on, wheeled around the store for a few minutes, paid the $10, and brought them home. And immediately started dreaming about spring and roller-skating. In my dreams, I was rolling and zooming everywhere, at lightning speed. (These were actual nighttime dreams, not daydreams —  like flying dreams, only rollier.)

These are the magical shoes I found!

It took a while for the weather to clear and warm up. Meanwhile, I found a pair of second-hand ski poles, figuring they’d come in handy when the day finally came. I was a novice, after all, not having roller-skated since 1967, when I owned a pair of the strap-onto-your-own-shoes type. I’d tried rollerblading once since then, but the stiff boots killed my shins, and I hated it. The ski poles were also cheap, around $8. I was ready! The right day rolled around. I live on a hill, but there’s a park nearby with a cushioned running track and 6 km. of sidewalks circling throughout. I carried the skates to the running track, tied them on, and got rolling. After about 15 minutes of blissfully smooth skating on the track, a serious athlete informed me that no wheels were permitted on the track. I took to the sidewalks.

This is the safe but forbidden running track where I began my skating adventure.

Here’s what I jotted down after my three-hour, self-directed experiment.

Gliding in my dreams is NOT the same as doing it in real time and space.

This is what I imagined it would be like, after a few minutes of practice.

Bringing (and using) ski poles probably saved my life. However, their use didn’t prevent three very hard falls. No, I will NOT try letting my dog pull me, ever. That is clearly a crazy/bad idea and I’m glad I didn’t attempt it. 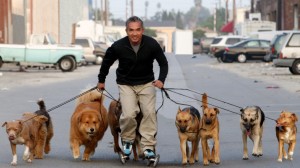 Cesar Milan is doing this on” Land Roller Skates”, not regular ones. I could not find a single picture of someone doing this on my kind of skates, for obvious reasons.

Wearing ear muffs and capris was admittedly an odd look, but  smart, since it’s April and the wind does blow. (No, I will NOT include a real picture of me thus dressed.)

I  fell only backwards, onto my derriere, each time. And I landed on the same parts of my anatomy, on my left side, every time. An actual ‘fanny pack’ would be useful for future outings, as my rear is less padded than it used to be. As would be padded gloves, and something to protect my left forearm. 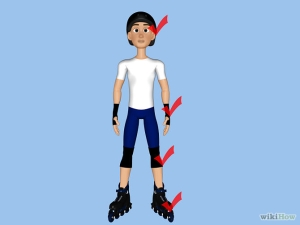 This is the picture I should’ve consulted first, but didn’t. Notice how it even highlights the LEFT side of the body, in a creepy, prescient way.

It’s possible to bruise your ankle bones by over-tightening your laces. Remember this for next time.

Those darn blackberry bushes really are out to get me, even months before picking season. (I didn’t mention the scratches yet.)

These beautiful but deadly branches get me all year round. And I have the scars to prove it.

The single back-stopper on my right skate has no apparent usefulness. Must do some You-Tubing and investigate further.

“Gentle slopes” when walking become SPEED HAZARDS when skating. This is NOT a flat park, although it appears relatively flat next to the mountains behind it.

This is the not-actually-flat park that had me fooled. For the past 10 years, I pictured it like a pancake at the base of the mountain.

Going with the flow, especially downhill, is essential for skating pleasure. I have not yet mastered this Zen-like state on roller skates. Like I said, the hidden hills spooked me.

You can climb stairs in roller skates by walking on your toes.

Spacing out and feeling too confident, too soon, are sure-fire ways to wipe out and look like an idiot. (Of course, trying not to appear idiotic, I jump up quickly and act like nothing happened, in spite of acute pain, bleeding, breathlessness and total body shock.)

It was nice to have a (handsome) young man express concern about how hard I fell, then smile and commend me as a “real trouper”. (Hey, at my age, it’s hard to get noticed! This method really works, but I don’t recommend it unless you’re very crazy and very desperate for attention.)

This is Chace Crawford, not the young man at the park. But you get the idea.

Part II: The Good, the Bad, and the Ugly:

The real report  wasn’t clear until  day four. That’s when the bruising started to surface, along with the abounding pain that doctors like to refer to as ‘exquisite’. and  All injuries were unilateral — left side only, except for the injuries to my pride.   The pain got worse from days four to ten. I used lots of frozen peas as cold packs and swallowed lots of naproxen.

Everyone in my family rebuked me for not wearing full-on protective gear. I got very little no sympathy from any of them.

My roller-skating dreams have vanished from my current dream life. I still take the shoes out and look at them from time to time. They don’t look brand-new anymore.

There’s another park running next the river that might actually be flat. Of course, this could be another case of looking one way and being another, but I won’t know until I hit it.

These boys don’t believe in optical illusions.They just go with the flow.

Bottom line is,  I need to find some cheap but effective protective gear. My brother has offered to lend me his head-to-toe, latest and greatest motorcycling crash suit, but I’m resistant. I think I sweat too much, not to mention the sweat he’s contributed to the suit over the past many years. (He’s into ‘natural’, not dry cleaners.)

Meanwhile, the weather has turned cold again. so I’ve had time to rethink my strategy….

Please don’t tell my family I’m going to skate again. They might have me committed.

Categories: Whimsy and Flashes of Brilliance