Purple Splash of Glory on Kitchen Ceiling : the Poem 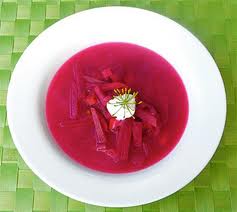 Borsht says it all:
the time it took to chop and shred the purple hearts
that stain the maker red. The subtle spice that holds the spin
of earthy power within its peasant stock. So simple,
so sublime: borsht has it all.

Borsht was what we made to celebrate the founding of our love.
Our first dispute: should garlic be allowed to ravish borsht?
Well, I thought not
but you said yes; two heads went in the purple pot….
and you were right! The garlic made it rock –
new twist on old favorites.

Borsht is what I made the morning after I was born again;
it was my way of saying thank you from the heart.
You thought the colour brash, too kitschy and too ruby to be true –
but now you’ve let the purple in.

Borsht is what I’ll make to celebrate reunion with my friend:
she’s seen me grow beets, stew beets, turn my heels and leave old beets behind.
And now we’ll stir the pot, remembering
first days, last nights, and all the ruby years between
our sacred purple pots of beetroot soup.

Growing up, “borsht” days were always special. We all had to wear bibs before indulging in this most delicious fare — because beets stain! One day when I was in elementary school, we came home to find that the pressure cooker lid had exploded — and the visuals were fantastic. Later in life, I made borsht on three personally momentous occasions: at the beginning of a deep love relationship, after my (future) husband studied the Bible with me, and in honor of a very close friend who was visiting my home for the first time in 30 years. Rich, purple, and delicious — like the best of life.